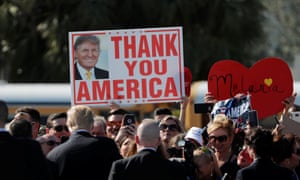 Trump Jr backed up Kirks claim of a culture war, with the nations colleges and universities as the battleground. You guys are on the frontlines, he said.

Greg Aselbekian, a 24-year-old studying business management at Nichols College, Massachusetts, said he had lost friends over his support for Trump.

I feel the whole country is even more divided, he said. You got the media, you got everybody telling you to vote for Hillary or vote Democrat, and the people who listen to them will not really listen to our side because they think the left side is the only way to be.

You have antifa destroying cities, youve got groups like Black Lives Matter and feminism just taking things way to a different level, all these marches and riots. Anyone whos white who voted for Trump is a white supremacist. Theres a price to pay when youre in favour of Trump or anything rightwing.

Joel Valdez, 18, a first-year political science major at the University of Illinois, said a campus incident in which a leftwing activist smashed his phone had only bolstered his resolve.

Im a Hispanic American and theyre calling me white supremacist, he said. After the election of Donald Trump the left was really shaken up. [But] the conservative message is going to resonate with people who felt left out by the Democrats.

Hannah Bickford, 21, a music student at Montana State University, was dressed in a Trump hat and college Republican shirt to signal her support for the president. She declared she was very happy with his performance so far.

Im here to network with people and hear from amazing speakers and people who share similar ideas, learn from each other and grow as a group of people, she said. Im open to anything, to listen and discuss.

You cant really learn unless youre open to new things.