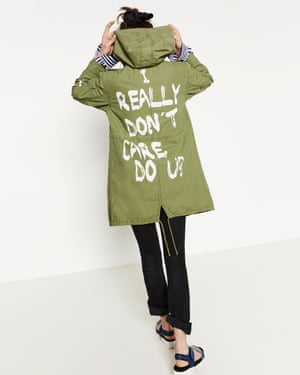 The jacket as it appears on the Zara website. Photograph: PR Image/Zara

According to a pool report, Trumps communications director, Stephanie Grisham, told a reporter via email: Its a jacket. There was no hidden message. After todays important visit to Texas, I hope the media isnt going to choose to focus on her wardrobe.

However, a tweet from President Trump later suggested that there was meaning behind the jacket, saying his wifes coat was referencing the media rather than traumatised children.

He tweeted: I REALLY DONT CARE, DO U? written on the back of Melanias jacket, refers to the Fake News Media. Melania has learned how dishonest they are, and she truly no longer cares!

Some commentators were taking Melanias choice of attire as a politically calculated move.

Amnesty Internationals US branch tweeted they were shaken by the blatant lack of empathy the first lady demonstrated when she chose to wear the jacket.

Many have praised Trump for seeming to diverge from Donald Trumps attitude on separating children from their families.

On Sunday, while the president was still defending the policy, her communications director released a statement saying the first lady hates to see children separated from their families and hopes both sides of the aisle can finally come together to achieve successful immigration reform.

Its not clear whether this jacket is a nod to those concerned that she is being too soft on immigration, sending some sort of message as her husband claimed, or was some sort of wardrobe malfunction.

It is, however, unusual for Melania Trump to wear inexpensive clothes when on public business. At the G7 summit last year, she wore a floral coat worth $51,000. While arriving back from a trip last June, she was spotted carrying an overnight bag: a Herms Birkin bag worth $13,500.

Despite the controversy it caused, when Melania returned to Andrews air force base later in the afternoon she was still wearing the jacket in front of reporters.