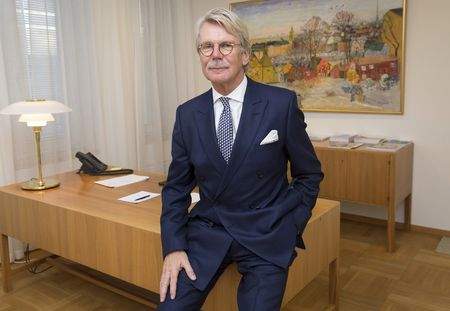 The chairman of the biggest Nordic bank says Donald Trumps election win is good news for the U.S. economy, thanks to the real estate moguls pledge to deliver tax cuts and deregulation.

Based on the expectation that the American President and Congress are likely to act on taxes, and perhaps on regulation as well, I think there is a slightly more positive outlook for the American economy over the intermediate horizon, Bjorn Wahlroos, the chairman of Nordea Bank AB, said in an interview in Stockholm on Thursday. But for the rest of the world, things will probably continue as before, he said.

Wahlrooss view of Trumps policies contrasts with criticism he has leveled at Swedens government for pushing laws he says are too tough on banking. The ruling coalition in Scandinavias largest economy, whose banks are among the worlds best capitalized, is planning a new financial tax to help cover welfare spending. The finance industry warns such a levy may wipe out 16,000 jobs as firms either move operations abroad or rely on robots instead of humans. The government says banks are exaggerating.

Theres much to suggest Swedens regulatory environment has done little to hamper its banks from thriving. In the years following the 2008 financial crisis, Swedens four biggest banks — Nordea, Handelsbanken, Swedbank and SEB — have consistently outperformed most of their peers in European stress tests.

Since the beginning of 2009, Nordea has doubled its market value, making it roughly twice as big as Deutsche Bank. JPMorgan and Goldman Sachs have both seen their market values rise about 150 percent over the same period. Wells Fargo is up almost 80 percent, while Citigroup is down about 16 percent.

Theres evidence to suggest that a more rigorously regulated environment supports rather than impedes economic health. Under Democratic administrations, which have tended to lean more heavily toward regulation than their Republican counterparts, the U.S. economy grew an average of 4.33 percent a year. Republican administrations have overseen an average growth rate of 2.54 percent, according to a 2015 paper by Princeton University economists Alan S. Blinder and Mark W. Watson covering 64 years of data.

Wahlroos said he wants Nordea to stay in Sweden, but warned that there are limits to how far his loyalty to the country will stretch if the business environment becomes too difficult. Hes previously signaled a readiness to shift parts of the banks operations outside Sweden and his talks this summer over a potential merger with ABN Amro Group were widely seen as a hint to the government in Stockholm that he was willing to turn words into actions.

By approaching ABN Amro, Nordea has made the point, in mild words, that it is important from our point of view that we need to be competitive, Wahlroos said. The commitment to Sweden may change if indeed new sort of levies or new regulations are placed on the banking industry, he said.

As for the U.S. under a President Trump, Wahlroos said the reality TV stars protectionist views may ultimately undo any good that is expected to come from his other policies.

It remains to be seen whether Trumps negative stance on some issues such as free trade will over the longer run have a negative impact, he said.

But over the short term, his approach to taxes and implicit promise of tax cuts, particularly corporate taxes, have a positive outlook.

While Wahlroos was relatively upbeat on Trumps election win, he was gloomier on Britains efforts to disentangle itself from the European Union. Though the Nordea chairman said he saw Brexit coming, after numerous trips to rural England, the sheer complexity of the task ahead is still only just dawning on people, he said.

The technical perplexity of this thing — clause 50 and what it all entails — the task is just daunting, he said. Nordea itself isnt really exposed to any Brexit risks, he said.

There might be a small negative in our London operation, which is not all that big, but on the other hand you can also say that we gain in competitiveness relative to the British banks.