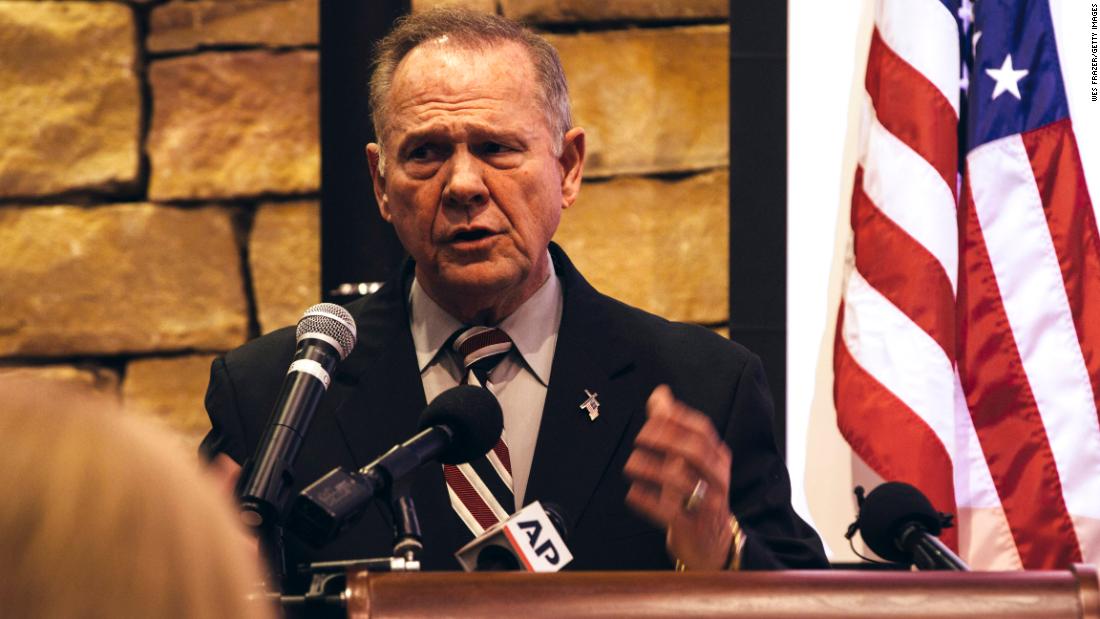 (CNN)Alabama Republican Senate nominee Roy Moore appeared on a conspiracy-driven radio show twice in 2011, where he told the hosts in an interview that getting rid of constitutional amendments after the Tenth Amendment would ‘eliminate many problems’ in the way the US government is structured.

Alabama’s special election for Senate, in which Moore is facing Democrat Doug Jones, will be held Tuesday. Moore’s controversial views on a variety of subjects — including homosexuality, Islam, and evolution — have come into sharper focus in the final days of the campaign, even as Moore has had to deal with multiple accusations from women who say that he sexually assaulted or pursued relationships with them as teenagers when he was in his 30s. Moore has denied all allegations.
Moore also faced criticism for comments he made in September at a campaign rally. According to the Los Angeles Times,  when asked by a black member of the audience when he thought the last time America was great, Moore answered, “I think it was great at the time when families were united — even though we had slavery — they cared for one another. Our families were strong, our country had a direction.”
Moore made his comments about constitutional amendments in a June 2011 appearance on the “Aroostook Watchmen” show, which is hosted by Maine residents Jack McCarthy and Steve Martin. The hosts have argued that the US government is illegitimate and who have said that the September 11, 2001, attacks, the mass shooting at Sandy Hook, the Boston bombing, and other mass shootings and terrorist attacks are false flag attacks committed by the government. (False flag attacks refer to acts that are designed by perpetrators to be made to look like they were carried out by other individuals or groups.)

The hosts have also spread conspiracy theories about the raid that led to the death of Osama Bin Laden and have pushed the false claim that former President Barack Obama was not born in the US.

CNN’s KFile obtained audio from Moore’s two appearances on the show. In the same June episode, Moore invoked Adolf Hitler in a discussion about Obama’s birth certificate. In a May 2011 episode, Moore told the two radio hosts, who have repeatedly rejected the official explanation for the 9/11 attacks, that he would be open to hearings looking into “what really happened” on that day.

In Moore’s June appearance, one of the hosts says he would like to see an amendment that would void all the amendments after the Tenth.

“That would eliminate many problems,” Moore replied. “You know people don’t understand how some of these amendments have completely tried to wreck the form of government that our forefathers intended.”

Moore cited the 17th Amendment, which calls for the direct election of senators by voters rather than state legislatures, as one he particularly found troublesome.

The host agreed with Moore, before turning his attention to the 14th Amendment, which was passed during the Reconstruction period following the Civil War and guaranteed citizenship and equal rights and protection to former slaves and has been used in landmark Supreme Court cases such as Brown v. Board of Education and Obergefell v. Hodges.

“People also don’t understand, and being from the South I bet you get it, the 14th Amendment was only approved at the point of the gun,” the host said.

“Yeah, it had very serious problems with its approval by the states,” Moore replied. “The danger in the 14th Amendment, which was to restrict, it has been a restriction on the states using the first Ten Amendments by and through the 14th Amendment. To restrict the states from doing something that the federal government was restricted from doing and allowing the federal government to do something which the first Ten Amendments prevented them from doing. If you understand the incorporation doctrine used by the courts and what it meant. You’d understand what I’m talking about.”

“For example, the right to keep and bear arms, the First Amendment, freedom of press liberty. Those various freedoms and restrictions have been imposed on the states through the 14th Amendment. And yet the federal government is violating just about every one of them saying that — they don’t they don’t — are not restrained by them.”

Moore’s campaign spokesman told CNN’s KFile that Moore does not believe all amendments after the Tenth should be eliminated.

“Once again, the media is taking a discussion about the overall framework for the separation of powers as laid out in the constitution to twist Roy Moore’s position on specific issues,” Doster said in an emailed statement. “Roy Moore does not now nor has he ever favored limiting an individual’s right to vote, and as a judge, he was noted for his fairness and for being a champion of civil rights.

“Judge Moore has expressed concern, as many other conservatives have, that the historical trend since the ratification of the Bill of Rights has been for federal empowerment over state empowerment.”

In the same June episode, Moore invoked Adolf Hitler in a discussion about Obama’s birth certificate. Moore has in the past repeatedly questioned Obama’s citizenship.

“Now let me ask you a question. You think that Barry Soetoro — oh I’m sorry, Barack Obama — you think you could get the security clearance that you got,” a host asked.

“I think his dog could get a security clearance easier, the dog’s got papers,” the host interjected.

“I know what you mean Jack,” Moore said.

The host then said that when he was in the military, Obama’s documentation would not suffice to get him on a submarine.

Moore responded, “Well that’s, that’s a problem. You know Hitler once said, ‘you tell a big enough lie long enough, people to believe it.’ And that’s that’s the problem. We’ve got to look at simple facts of the case, and we need to recognize we need a new administration in Washington. And it just doesn’t, based upon party, we need like people that uphold the Constitution not undermine it.”

In the May 2011 episode of Aroostook Watchmen, after one of the hosts asks Moore if he would be “interested in new hearings into what really happened on 9/11,” Moore replies, “Well, I think they need to explore that, yes, but it’s something that’s already done and now we have to live with the consequences. But I know what you’re talking about. If there’s any new evidence, we always go back to the truth. If there’s anything that’s not been revealed, we need to know about it,” he said.

Moore campaign spokesman Brett Doster told CNN that Moore “believes that Islamic terrorists were responsible for the 9/11 attacks, has made rebuilding the military one of his key campaign purposes, and is the only Senate candidate with experience serving in a combat zone.”