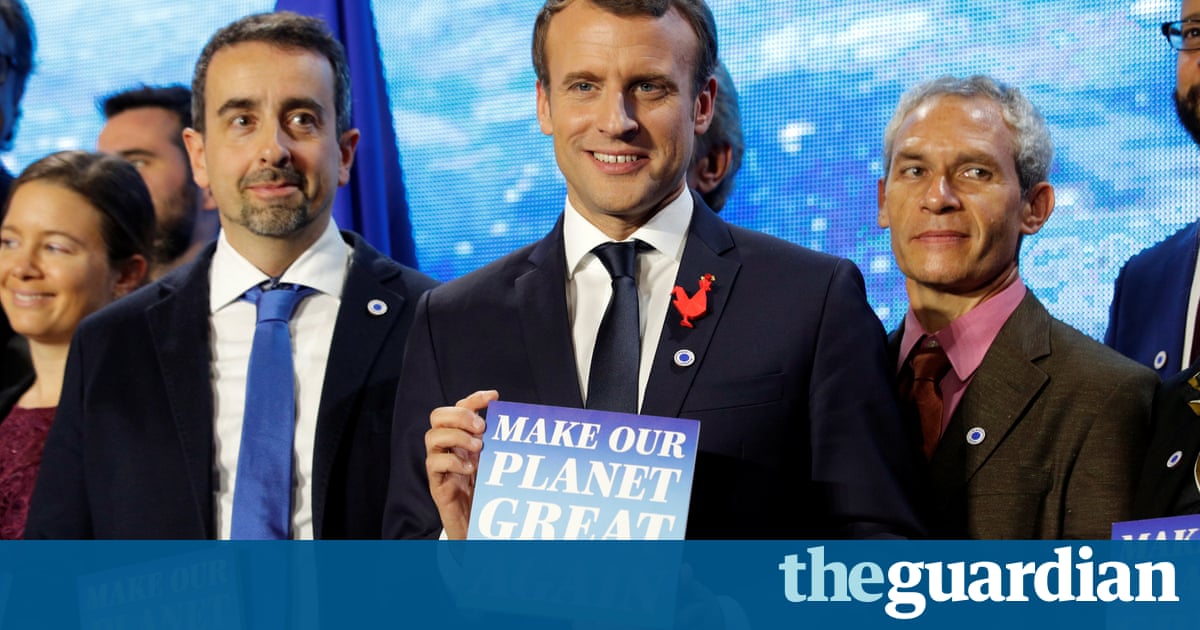 Eighteen climate scientists from the US and elsewhere have hit the jackpot as Frances president, Emmanuel Macron, awarded them millions of euros in grants to relocate to France for the rest of Donald Trumps presidential term.

The Make Our Planet Great Again grants a nod to Trumps Make America Great Again campaign slogan are part of Macrons efforts to counter Trump on the climate change front. Macron announced a contest for the projects in June, hours after Trump declared he would withdraw the US from the Paris climate accord.

More than 5,000 people from about 100 countries expressed interest in the grants. Most of the applicants and 13 of the 18 winners were US-based researchers.

Macrons appeal gave me such a psychological boost, to have that kind of support, to have the head of state saying I value what you do, said winner Camille Parmesan, of the University of Texas at Austin. She will be working at an experimental ecology station in the Pyrenees on how human-made climate change is affecting wildlife.

In an interview with the Associated Press, Parmesan described funding challenges for climate science in the US and a feeling that you are having to hide what you do.

Trump has expressed skepticism about global warming and said the Paris accord would hurt US business by requiring a reduction in climate-damaging emissions.

We will be there to replace US financing of climate research, Macron told the winners in Paris on Monday.

If we want to prepare for the changes of tomorrow, we need science, he said, promising to put in place a global climate change monitoring system among other climate innovations.

The research of the winning recipients focuses on pollution, hurricanes and clouds. A new round of the competition will be launched next year, alongside Germany. About 50 projects will be chosen overall, and funded with 60m ($70m) from the state and French research institutes.

Initially aimed at American researchers, the research grants were expanded to other non-French climate scientists, according to organizers. Candidates need to be known for working on climate issues, have completed a thesis and propose a project that would take between three to five years.

Some French researchers have complained that Macron is showering money on foreign scientists at a time when they have been pleading for more support for domestic higher education.

Mondays event is a prelude to a bigger climate summit Tuesday aimed at giving new impetus to the Paris accord and finding new funding to help governments and businesses meet its goals.

More than 50 world leaders are expected in Paris for the One Planet Summit, co-hosted by the UN and the World Bank. Trump was not invited.

Other attendees include Arnold Schwarzenegger, who took a spin on a Parisian electric bike Monday to call attention to health problems caused by pollution.

The Hollywood star and former California governor argued that Trumps rejection of the Paris climate accord doesnt matter, because companies, scientists and other governments can pick up the slack to reduce global emissions.