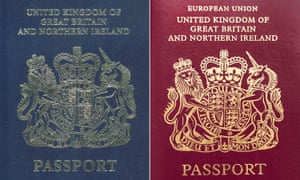 Under a system first agreed by Margaret Thatchers government in 1981, Britain is not legally obliged to use the same burgundy design as most other members but agreed to do so in a joint resolution of member states in the European council.

The agreement to harmonise certain design features followed a backlash over more ambitious plans for a community-wide passport, but it also included rules to put the words European Community in front of the name of the member state.

Council members, including Britains then ambassador to the EU, Michael Butler, signed a resolution aiming to strengthen the feeling among nationals of the member states that they belong to the same community but left an opt-out clause that is still used today by some members such as Croatia, which also has a blue passport.

May said Britain was choosing to return to its iconic blue design even though the shade proposed would be significantly lighter than the near-black navy used in previous, larger, UK passports. The majority of changes since this period have been mandated by other international aviation and security agreements outside the EU and will continue to dictate the size and content of UK travel documents.

Experts stressed that the balance between national sovereignty and harmonising travel rules was more complex than changing the appearance of a passport. The reality is that the new passports will symbolise having fewer free movement rights, said Peers. We will also still have to go through the slow lane even if we have non-expired [burgundy] passports. It may not be vastly more difficult, but it will be somewhat more difficult.

It does seem odd to make a big patriotic noise about something that makes it harder for you to travel.

Fabian Zuleeg, chief executive of the European Policy Centre, agreed that it would depend on the final EU/UK settlement as to whether it would be harder for British passport holders to travel in Europe in future. If UK citizens were treated as nationals of the European Economic Area, the EU plus Norway, Iceland and Liechtenstein, then there would be no problem. Otherwise they could face longer queues, though he stressed nothing was definite.

In Britain, opposition politicians rejected the prime ministers claim that changing the colour was a victory for sovereignty.

What utter nonsense this belittles our country and your office, said the Labour MP Chuka Umunna. Weve always been a great nation, proud to be British and of our standing in the world.

The former Labour leader Ed Miliband added: It is an expression of how mendacious, absurd and parochial we look to the world.

David Lammy, the MP for Tottenham, said Brexit was turning us into a laughing stock. Were swapping the right to live and work in 27 countries for new passports, he said. But dont worry, when were all stood in the airport for four hours we can stand in the queue and look at just how blue they are.

Academic experts on Brexit urged remain supporters not to underestimate the power of symbolism for leave supporters. Its a sign of the times that the mirror image of it appealing to a certain segment of the British population is that it will be a total turn-off to the other, said Anand Menon at Kings College London. Its a reflection of how divided our society is: some people just cannot compute and other people are celebrating.

The former British diplomat Sir Simon Wall suggested it was a measure carefully targeted at a demographic group most in need of buoying up after recent concessions.

Its aimed at the Brexit generation. Anyone under the age of 50 will hardly remember any other passport than we have now, he said. It seems from her recent performance that Theresa May has belatedly grasped the fact that we need to make some pretty dramatic compromises and she needs a bit of smoke as well this is part of that.

European officials distanced themselves from the original decision to adopt burgundy passports, stressing it was voluntarily agreed to by member state governments. This has nothing to do with the European commission, nothing at all, said the spokesman Mark English.

Claude Moraes, the British Labour MEP, who chairs the European parliaments civil liberties, justice and home affairs committee, warned that the new passports could become a symbol of what British nationals stand to lose from Brexit.

What is being lost with the burgundy passport are the freedoms to move in the EU27 and other related freedoms, he said. There is every risk now that with the UK passport you will be subject to greater queus, greater checks and more inconvenience.

The MEP, who is one of the lead negotiators for the parliament on Etias, said he was deeply sceptical that the EU27 would offer the UK a special deal. He said the UK would be on the other side of policies aimed at strengthening the EUs external border, including Etias and a stronger border and coastguard agency.

That is something people will have to get used to and the new passport will symbolise that.