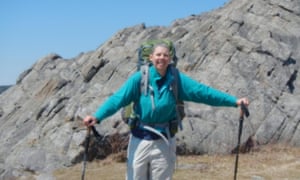 Judy Perkins says her condition had deteriorated a lot and she was planning her death. But since the treatment she has been on a 40 mile hike. Photograph: Courtesy of Judy Perkins

The dramatic success has raised hopes that the therapy will work in more patients with advanced breast cancer and other difficult to treat cancers, such as ovarian and prostate. Researchers are now planning full scale clinical trials to assess how effective the treatment could be.

We are now at the cusp of a major revolution in finally realising the elusive goal of being able to target the plethora of mutations in cancer through immunotherapy, Radvanyi said.

But experts caution that the treatment has only proved itself in one woman and that the clinical trials are needed to see how effective the therapy could be in other cancer patients. Researchers point out that while the treatment could in principle work for many different kinds of cancer, it will not help everyone.

To create the treatment, doctors first cut small pieces of tissue from Perkinss tumours and studied the DNA to find mutations specific to her cancer. They focused on mutations that disrupted four genes which produced an array of abnormal proteins in the tumours.

Next, the doctors extracted immune cells known as tumour infiltrating lymphocytes, or TILs, from the tumour biopsies. These are cells from the patients immune system that have invaded the tumour in a bid to kill it, but which failed in the task by being either too weak or too few in number.

After growing billions of these immune cells in the lab, the researchers screened them to find which ones would most effectively find and destroy the womans cancer cells by recognising their abnormal proteins.

The doctors treated Perkins by injecting 80 billion of the carefully-selected immune cells into her body. The therapy was given alongside pembrolizumab, a standard drug that can help the immune system to attack cancers. Tests after 42 weeks showed Perkins was completely cancer free. She has remained so ever since.

It feels miraculous, and I am beyond amazed that I have now been free of cancer for two years, Perkins said.

I had resigned my job and was planning on dying. I had a bucket-list of things I needed to do before the end, like going to the Grand Canyon, she added. Now, I have gone back to normal everyday life.

While the US doctors who developed the therapy cannot be sure how much the infused immune cells contributed to her recovery, the use of pembrolizumab alone has not been very effective for advanced breast cancer in the past. The infused T cells were found in Perkinss system for at least 17 months after her treatment began.

The success, reported in the journal Nature Medicine, is all the more remarkable because breast cancers, like prostate and ovarian cancer, have relatively few mutations, which makes them harder for the immune system to spot amid the bodys healthy tissues.

Alan Melcher, professor of translational immunotherapy at the Institute of Cancer Research in London, who was not involved in the study said: The work shows that even cancers like breast cancer, which dont have many antigens, are amenable to this sort of treatment. It would certainly be applicable in principle to a range of tumours, and even those in which immunotherapy hasnt worked so well yet.

But Melcher points out that the therapy is complex and expensive and more importantly, requires doctors to find enough infiltrating immune cells in a patients tumour to make the treatment effective. The case with other TIL therapies in the past is that theyve not been able to expand enough T cells in many patients, there arent enough to start with.

Simon Vincent, director of research at Breast Cancer Now, added: This is a remarkable and extremely promising result, but we need to see this effect repeated in other patients before giving hope of a new immunotherapy for incurable metastatic breast cancer.

Metastatic breast cancer remains incurable, and if we are to finally stop women dying we urgently need to find new ways to target and stop the spread of the disease. We are thrilled by this early finding, but we must remember that this type of immunotherapy remains an experimental approach that has a long way to go before it might be routinely available to patients.