Israeli Prime Minister Benjamin Netanyahu said his country has half a ton of Iranian documents that prove Tehran had a secret program to build nuclear bombs, potentially giving President Donald Trump ammunition to pull the U.S. out of the Iran nuclear accord.

“Iran lied about never having a nuclear weapons program,” Netanyahu said in a press conference in his government’s defense compound in Tel Aviv. “After signing the nuclear deal in 2015, Iran intensified its efforts to hide its nuclear files.”

A person familiar with the matter said the U.S. had seen the documents and considered them authentic. The documents were consistent with evidence that the American government had compiled, and showed that Tehran had concealed some of its weapons activities from international inspectors, according to the person, who asked for anonymity to discuss sensitive information.

Israel uncovered 55,000 pages of material on a weapons program that operated between 1999 and 2003 code-named Project Amad, Netanyahu said, pulling back a curtain to reveal shelves filled with what appeared to be binders and compact discs of information. He said the nuclear program continued after it was subsumed under a different guise, and that Iran took steps as recently as last year to move its files to a concealed location so it could revive the program down the line.

Iran’s foreign minister, Mohammad Javad Zarif, called Netanyahu’s allegations lies “already dealt with” by the International Atomic Energy Agency. His deputy, Abbas Araghchi, said the presentation used an “old, worn-out scenario” to manufacture a case against Tehran, which denies ever having sought to build a bomb. Even some critics of Iran agreed that Netanyahu repackaged old information.

Netanyahu’s presentation was “nothing new,” Senator Bob Corker, the Republican head of the Foreign Relations Committee, said in an interview on Bloomberg Television. Corker, who has been critical of the agreement, said “the best outcome would be to resolve the problems with the deal.”

Secretary of State Mike Pompeo, speaking to reporters as he flew back to Washington from a trip to the Middle East and Europe, said “the documents are real, they’re authentic.” Asked if there was anything in them that suggests a violation of the nuclear agreement, Pompeo said, “We’ll leave that to the lawyers.” 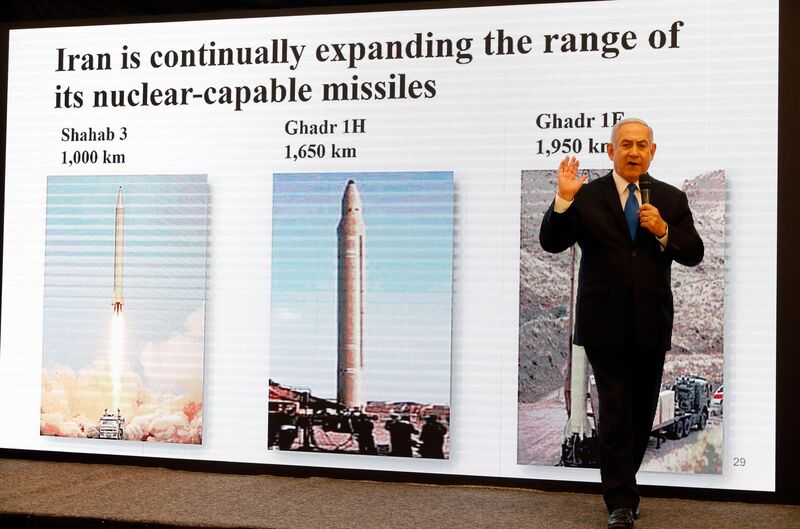 Oil prices briefly climbed about 50 cents on the news before paring gains to just below $69.

Netanyahu spoke less than two weeks before Trump is to decide whether the U.S. will pull out of the international agreement between Iran and six world powers that curbed Iran’s nuclear program in exchange for sanctions relief. The accord lifts key restrictions on Tehran’s nuclear activities beginning in 2025, and Trump has warned that he would withdraw from the pact unless it was revised to bar Iran from ever developing atomic weapons.

In remarks in Washington after Netanyahu spoke, Trump left open the possibility of negotiating a new Iran deal but hinted the U.S. would quit the accord by May 12, the deadline he’s set for a decision.

“I’m not telling you what I’m doing but a lot of people think they know,” he said. “And on or before the 12th we’ll make a decision. That doesn’t mean we won’t negotiate a real agreement.”

Questions about American and Israeli depictions of the information as groundbreaking only intensified after White House Press Secretary Sarah Huckabee Sanders issued a statement saying the data supported a U.S. conclusion that “Iran has a robust, clandestine nuclear weapons program that it has tried and failed to hide from the world and from its own people.”

After commentators pointed out that the data appeared to only verify that Iran had a nuclear program before the international agreement froze development, the White House quietly updated its statement to reflect that the information obtained by the Israelis simply showed that Iran “had” a clandestine program. Sanders did not return a request for comment about the apparent mistake.

Netanyahu said Israel has shared the information it has obtained with the U.S., and that he was sure Trump would “do the right thing” when he decides whether to remain in the nuclear accord.

Netanyahu delivered his presentation as rising tensions between Iran and Israel have been stoking fears that the two Middle Eastern powers are headed for a military showdown in Syria.

Several analysts poked holes in his portrayal of his disclosures as “something the world has never seen.”

“The information he’s talking about refers to the period that led us up” to the nuclear deal, said Jarrett Blanc, a former deputy lead coordinator and State Department coordinator for Iran nuclear implementation. “We’ve always known they were lying, that’s why we did what we did.”

“If I really thought something new was in there, the last thing I’d do is go to television to announce this,” Blanc added. “The whole thing makes me think that it’s being treated as political theater, and maybe that’s all that it is.”

“The JCPOA is a different thing altogether that doesn’t look at weapons,” he said. “It’s there to make sure Iran doesn’t get the material to make weapons.”

The International Atomic Energy Agency knew about Netanyahu’s most serious allegations, including the possibility of creating a hemispheric implosion device, during its 12-year investigation, he added.

The IAEA didn’t immediately respond to calls and emails seeking comment, but the European Union’s foreign minister, Federica Mogherini, said the evidence so far fails to show non-compliance with the nuclear agreement.

“The deal was put in place exactly because there was no trust between the parties, otherwise we would not have required a nuclear deal to be put in place,” Mogherini added in a statement.

United Nations nuclear inspectors have reported 10 straight times that Iran has capped its most sensitive nuclear work that could be used to develop a bomb. The Vienna-based IAEA ended a 12-year probe in December 2015 into the possible military dimensions of Iran’s past atomic work.

“Iran is subject to the world’s most robust nuclear verification regime,” IAEA Chief Coordinator Cornel Feruta told diplomats on April 23 in Geneva. The agency captures hundreds of thousands of images daily and analyzes millions of sources of open-source data each month, he said.

Israel hasn’t been pacified by these reports, and continues to see Iran’s nuclear ambitions as a threat to its survival. Having failed to sway the U.S. from concluding the signature foreign-policy initiative of then-President Barack Obama, it has found a more receptive ear in the Trump administration.

So far the White House has failed to win the support of European allies that are signatories to the 2015 accord. French President Emmanuel Macron and Iranian President Hassan Rouhani on Sunday agreed to work together to preserve the agreement. Days earlier, Macron told German Chancellor Angela Merkel and British Prime Minister Theresa May that he urged the U.S. during his trip to Washington last week to stay in the accord and integrate it in a larger framework, rather than walk away.

Rouhani has said Trump’s insistence on changing terms of a seven-party deal violates it. In a readout posted on Iran’s official government website, he said the deal is “by no means negotiable.”