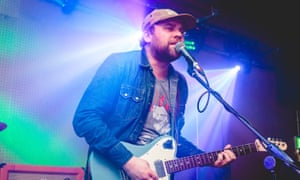 After hearing of his death, Frightened Rabbit posted a message on Instagram reading: There are no words to describe the overwhelming sadness and pain that comes with the death of our beloved Scott but to know he is no longer suffering brings us some comfort … he leaves a legacy of hope, kindness and colour that will forever be remembered and shared.

Hutchison had addressed mental health difficulties in his songwriting. In an interview published on Noisey last week, he described his mood: Middling. On a day-to-day basis, Im a solid six out of 10. I dont know how often I can hope for much more than that. Im drawn to negatives in life, and I dwell on them, and they consume me.

In a 2016 interview, he spoke of experiencing anxiety attacks, and of how affected he was by his emotions: Ive always seen that kind of emotional turmoil as an illness. Its one that lasts for quite a long time and cant be fixed. You know, you describe it as a hurt why would you describe it as that if it werent actually painful? Its not just mental torment.

Hutchison formed Frightened Rabbit initially as a solo project in 2003, before Grant joined him to record their debut album in 2006. The band expanded to a five-piece, and amassed a loyal following for their soul-baring, emotionally rich songwriting, including Aaron Dessner of US band the National who produced their most recent album, 2016s Painting of a Panic Attack Dessner said he was devastated, and called Hutchison a dear soul and a brilliant songwriter.

Robert Smith of the Cure had invited them to appear at Meltdown festival, which he is curating in London in June, and the band were also set to support US singer-songwriter Father John Misty in concert in May.

Hutchison had recently completed a tour with the band to celebrate the 10th anniversary of their breakthrough 2008 album, The Midnight Organ Fight, and another with his other band, Mastersystem. He had recently spoken of plans for a sixth Frightened Rabbit album, saying: I would like for that to be finished by the end of the year.

Among tributes to the singer, the radio DJ Edith Bowman tweeted: You ok fella? Sending love and a shoulder if you need it to Scott after his final messages wrote on Twitter: Cant really believe Im reading this. Saddest awakening ever. Love and best wishes to all the Hutchison and Frabbit family.

Stuart Murdoch from Scottish band Belle and Sebastian wrote: Tragic news about Scott Hutchison. The whole music community in Scotland was praying for a different outcome. Folks, if you are up against it, having dark thoughts, please tell someone, family, a friend or a doctor. There is always another way, though it might not seem like it. Mogwais Stuart Braithwaite said Hutchison was a lovely, warm talented guy and was loved by so many people, while Franz Ferdinands Alex Kapranos called his death a terrible loss.