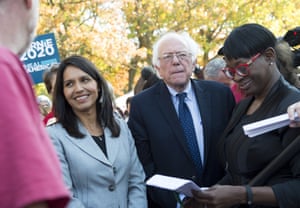 It is not uncommon for dominant incumbents to generally avoid debates. But Gabbards decision to decline to participate in such a forum has exposed her to charges of hypocrisy, since she forcefully advocated for adding more debates between Clinton and Sanders in 2016 in a high-profile split from other DNC leaders.

While she may think this is a strategic move to prevent the success of her challengers, what it really does is silence the discussion of important issues that face Hawaiis rural constituents, said Campagna. It also prevents any opportunities for voters to hold Tulsi accountable.

In 2015, Gabbard was among a minority of Democrats who voted for additional restrictions on refugees entering the US from Syria and Iraq. She has also previously expressed skepticism that the Assad regime is behind chemical weapons attacks in Syria, and aligned herself with nationalist figures such as Narendra Modi of India.

Breaking with most Democrats, Gabbard has embraced the use of the phrase radical Islam a phrase which to many Muslims has evolved into a dog whistle on the right intended to indict the entire Islamic faith. Gabbard has said she is mindful that most Muslims are not extremists, but joined Republicans in criticizing Clinton and Barack Obama for not employing the phrase, stating: Its important that you identify your enemy.

Gabbard declined an interview for this story.

Congresswoman Tulsi Gabbard has spoken out strongly against the Trump administrations travel/refugee ban, the Trump administrations illegal military strikes against Syria, Trumps decision to pull out of the Iran Nuclear Deal, Trumps decision to end DACA, and other dangerous decisions and policies, Erika Tsuji, a spokeswoman for Gabbards re-election campaign, said in a statement to the Guardian.

Gabbard also stands by her meeting with Assad, her spokeswoman said: She has stated time and again that peace can never be achieved if we only meet and speak with our friends. If we really want peace, we need to be fearless enough to sit down and speak directly with our adversaries.

Although a majority of Democratic voters in Gabbards district and neighboring areas said she was obligated to debate her rivals, the snub has not appeared to have had much palpable effect on her prospects.

Colin Moore, an associate professor of political science at the University of Hawaii, said Gabbards continued popularity was undeniable. But whereas he predicted Gabbard would sail to another term in Congress, Moore said she has yet to truly be tested nationally where her ambitions may, in fact, be.

The Hawaii congressional delegation has often thought of itself as a team whose primary goal is to go to Washington and bring federal dollars back to Hawaii, Moore said. The way they have done that is work with everyone, keep a very low profile, be around for a very long time and rise in seniority.

Tulsi has really bucked that trend she is this national political figure, who appears on CNN and other national media outlets quite frequently, talking about issues that dont directly affect Hawaii.

That has led to a sense that shes neglecting her responsibilities and that she isnt really serving her constituents well, he added.

It was revealed in June that Gabbard is writing a book to be published by a literary agency that boasts of representing presidential contenders. Last October, she traveled on a multi-day swing through the caucus state of Iowa, urging party unity while fueling speculation of higher ambitions.

Although her opponents are far from likely to pull off an upset this cycle, the brimming frustration that Gabbard is taking her position for granted and skepticism around her progressive image could foreshadow the challenges that lie ahead.