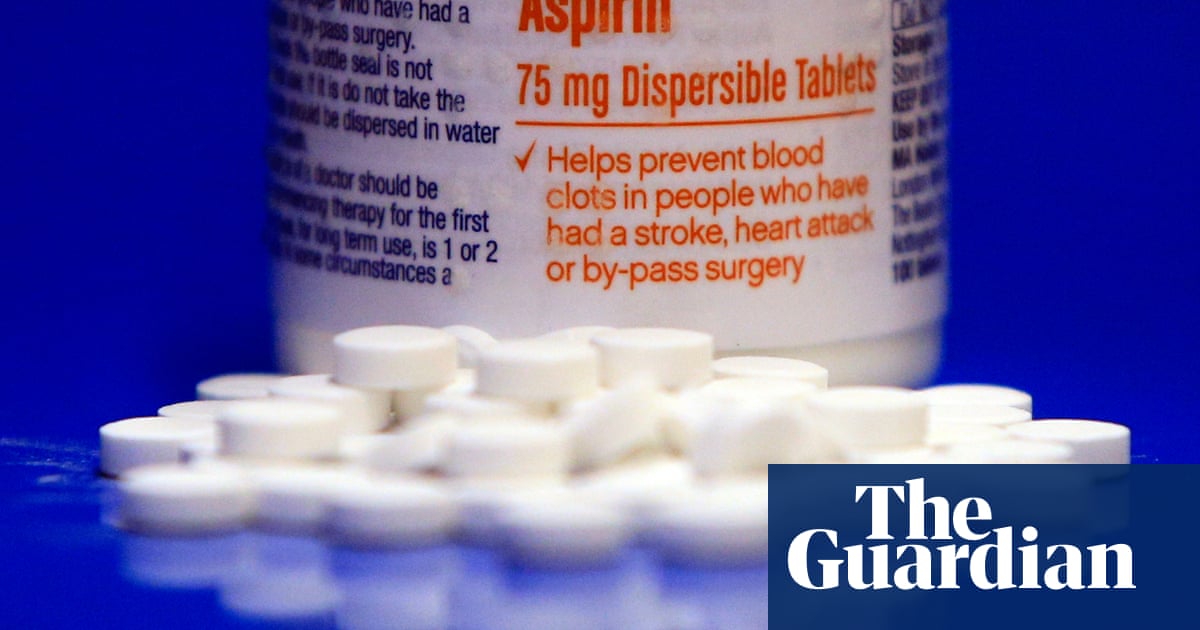 Millions of healthy people who take aspirin to ward off illness in old age are unlikely to benefit from the drug, a trial has found.

While a daily dose of the blood-thinning medicine can protect older people who have previously experienced heart attacks, strokes and angina, researchers found the drug did not extend the lifespan of healthy people over the age of 70.

Doctors in Australia and the US enrolled more than 19,000 healthy people, mostly aged over 70, for the trial. Half the participants were asked to take 100mg of aspirin each day, while the rest took a placebo pill.

When the participants were followed up nearly five years later, doctors found that compared with the placebo, a daily aspirin had not reduced the risk of heart attack or stroke, or prolonged the number of years people lived without dementia or physical disabilities.

In line with known side-effects of the drug, those in the aspirin group experienced more internal bleeding, with 3.8% of those on the drug having serious medical conditions ranging from stroke to gastrointestinal bleeds, compared with 2.7% in the placebo group.

Despite the fact that aspirin has been around for more than 100 years, we have not known whether healthy older people should take it as a preventive measure to keep them healthy for longer, said John McNeil, who led the trial at Monash University in Melbourne.

It means millions of healthy older people around the world who are taking low-dose aspirin without a medical reason may be doing so unnecessarily, because the study showed no overall benefit to offset the risk of bleeding.

Details of the trial were published in three papers in the New England Journal of Medicine.

The doctors unexpectedly found that those who took aspirin were slightly more likely to have died over the course of the trial (5.9%) than those who took the placebo (5.2%). Many of the extra deaths were due to cancer, but Leslie Ford from the National Cancer Institute in Maryland said that until the team had analysed more data, the cancer findings should be interpreted with caution.

Stephen Evans, a professor of pharmacoepidemiology at the London School of Hygiene and Tropical Medicine, said: The surprising findings here are the small increase in overall mortality, mainly through cancer including bowel cancer. Previous studies have not shown such increases, and reductions in bowel cancer have been seen in some studies. The authors rightly suggest treating the unexpected effects with caution, but they also show that benefits of aspirin in healthy people are at best limited, and may well be harmful, and this harm may be increased beyond age 73.

Peter Rothwell, the director of the Centre for Prevention of Stroke and Dementia at the University of Oxford, said the results provided the most reliable evidence on the balance of risk and benefit of starting aspirin after the age of 70 years in healthy individuals.