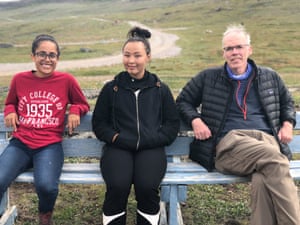 Hoping to rouse more of the world to action Jetnil-Kijiner and Niviana in Greenland with Bill McKibben Photograph: 350.org

Weve come with a video crew to the remote fjords of southern Greenland. After two days travelling by boat, weve unloaded our gear on the rocks at the foot of the rapidly dwindling glacier, and hauled it up to a base camp nestled on red granite bedrock next to a cascade fed by thundering meltwater. Now, in a cold wind next to a gaping crevasse, the two women are performing the words theyve spent weeks writing.

Jason Box says theres no doubt theyre both correct: all told, Greenland has enough water frozen on its rocky mantle to raise the sea by seven metres. After 25 years of field work on the great ice sheet, he understands its significance like few others: right now, theres no place on earth contributing more to the rise of the oceans. Eventually the even-vaster Antarctic will produce more water, but for now the Arctic is melting much faster (while we were camped on the glacier news reports said that sea ice north of the island the oldest, solidest ice in the Arctic had melted in this years freakish heat).

We called this Eagle Glacier because of its shape when we first came here five years ago, Box said, but now the head and the wings of the bird have melted away. I dont know what we should call it now, but the eagle is dead.

Its not, of course, as if global warming is some mysterious, uncontrollable force: it comes from a particular way of life, a way of life which has left some people rich and an increasing number in desperate straits. These poets cant avoid the politics: their stanzas indict the civilisations which long before we worried about climate change blew up Bikini Atoll in the Marshalls and polluted Greenlands ice sheet with nuclear waste.

Hearing the roll call of giant cities in the poem seems odd at first, on this remote glacier thousands of miles from the nearest traffic jam. But thats the point. There is no distance any more: the isolation that once protected places like Greenland or Micronesia no longer offers any buffer. The carbon that the rich pour into the air traps heat in the atmosphere we all share. That heat comes north and south, where it melts the worlds great storehouses of ice; in turn the oceans that lap at every continent rise. Kathy Jetnil-Kijiner literally stands with two feet planted on the ice that will submerge her country.

This science is uncontroversial. But science alone cant make change, because it appeals only to the hemisphere of the brain that values logic and reason. Were also creatures of emotion, intuition, spark which is perhaps why we should mount more poetry expeditions, put more musicians on dying reefs, make sure that novelists can feel the licking heat of wildfire.

Alun Hubbard, a Welsh glaciologist who was carrying huge loads of supplies up the glacier to build base camp, remembered his first visits to thawing Greenland. Its just gobsmacking looking at the trauma of the landscape. I just couldnt register the scale of how the icesheet had changed in my head. But artists can register those thoughts, and turn them into images that potentially unite us.

And that unity is precisely whats required, because otherwise inertia and the political power of the fossil fuel companies seems destined to slow our transition to renewable energy. Slow it enough that the ancient ways of life that gave rise to these young women will warp and then disappear. Slow it enough that everyone everywhere will feel the pain their communities are already feeling. These poets are up on the ice hoping that they can somehow rouse more of the world to action.

Excerpt from Rise by Kathy Jetnil-Kijiner and Aka Niviana

And who should die

We demand that the world see beyond

Their oil-slicked dreams, beyond the belief

That tomorrow will never happen

And yet theres a generosity to their witness a recognition that whoever started the trouble, were now in it together.

Let me bring my home to yours

None of us is immune.

Life in all forms demands

The same respect we all give to money

So each and every one of us

Bill McKibben wrote the first book about climate change, The End of Nature, in 1989, and co-founded 350.org, which has become the planets largest grassroots climate campaign. His forthcoming book is Falter: Has the Human Game Begun to Play Itself Out?