Technology tycoons lost $15.5 billion from their fortunes on Monday as a sell-off of the sector’s most valuable companies intensified. Facebook Inc.’s Mark Zuckerberg saw the biggest drop in net worth of $3.2 billion, followed by a $1.3 billion decline for Alibaba Group Holding Ltd.’s Jack Ma and a $1.2 billion wipeout for Amazon.com Inc.’s Jeff Bezos. The 59 tech moguls on the Bloomberg Billionaires Index control $942 billion, more than any other industry in the ranking.

Distinguishing an authentic Louis Vuitton bag from a well-made fake is a subtle art that involves counting stitches, feeling the leather’s grain and poring over print patterns. A New York startup says it has a technology that can spot counterfeits without the guesswork.

Entrupy’s solution is a handheld microscope camera that lets anyone with a smartphone check a luxury accessory within minutes. Since launching the service a year ago, the company says its accuracy has improved to better than 98 percent for 11 brands including Louis Vuitton, Chanel and Gucci.

Holographic tags, microprinting and even radio beacons woven into fabric have been used by fashion labels for years to help establish the authenticity of their products. Apparel makers will spend $6.15 billion on anti-counterfeit technologies in 2017, according to London-based researcher Visiongain, but the anonymity of internet shopping and the growing popularity of second-hand dealers is making the war against fakes harder.

“Even 10 years ago, a woman going to buy a second-hand bag would know very well that Chanel, Gucci and Prada don’t sell on the street corner,” said Susan Scafidi, director of the Fashion Law Institute at Fordham University in New York. “But now, with so much legitimate and illegitimate commerce occurring online, it is very difficult for consumers to tell the difference.”

The issue was highlighted last year when the International AntiCounterfeiting Coalition suspended the membership of China’s biggest online retailer, Alibaba Group Holding Ltd., amid criticism that it and other e-commerce marketplaces weren’t doing enough to cull fakes. Alibaba founder Jack Ma didn’t help matters when he said that Chinese-made knockoffs today can offer better quality than the genuine articles.

Second-hand online stores such as RealReal and Vestiaire Collective use experts with years of experience to determine the authenticity of the goods they buy and sell. It’s a painstaking process that isn’t absolutely foolproof, according to some online reviews from customers who complain they’ve been sold counterfeits.

The device, which looks like a bulky flashlight with a wireless connection, can be leased for an initial fee of $299. Monthly plans start from $99. So far, about 160 businesses including pawn shops, wholesalers and online retailers have signed up.

“Today everything is done by humans,” Entrupy co-founder Vidyuth Srinivasan said by telephone. “For businesses that are growing, that’s not a scalable solution.”

Srinivasan and two New York University researchers, Ashlesh Sharma and Lakshminarayanan Subramanian, started Entrupy in 2012, a year that was a turning point for computer vision.

A breakthrough in algorithms at a science competition called ImageNet vastly improved the ability of machines to identify everyday objects in photographs by using massive data sets to find patterns. It was a watershed moment for deep learning technologies that also underpin self-driving cars and better speech recognition software.

With some help from Yann LeCun, Facebook Inc.’s director of artificial intelligence research and an angel investor in Entrupy, Srinivasan and his partners started with a hunch that computers could be trained to look at pictures of luxury goods and extract a kind of genome, an essence of, say, a Fendi or an Hermes handbag.

The problem was that deep learning requires tons of data they didn’t have: none of the founders had a closet full of designer handbags, fake or otherwise.

After some unfruitful spy missions to the women’s sections of department stores, they convinced several New York second-hand shops to give them access to their inventories. Getting the knockoffs was easier: one of the co-founders brought a suitcase-full back from a trip to China. Entrupy’s database now has tens of millions of photographs from about 30,000 different handbags and wallets. The software learns as clients upload new pictures.

Srinivasan says the company has no relationships with any of the fashion brands whose products they authenticate. LVMH Moët Hennessy Louis Vuitton Se and other makers of luxury goods prefer not to acknowledge that there is a second-hand market for their merchandise.

Entrupy in July raised $2.6 million from investors led by a venture between Tokyo-based Digital Garage Inc. and Daiwa Securities Group Inc. The money will be used to design a faster and more portable camera and add more brands to Entrupy’s list, according to Srinivasan, who said the company is also looking at other uses for its software.

“The technology works pretty well on everything except for diamonds and porcelain, because those are refractive and we use optical analysis,” Srinivasan said. “We’ve already tested it on auto parts, phones, chargers, headphones, jackets, shoes, even crude oil.” 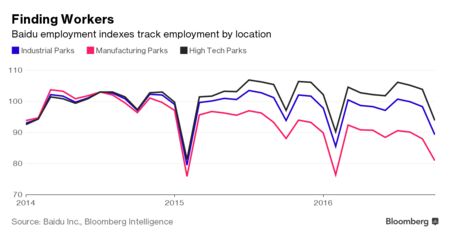 Wu Haishan was at Princeton University studying how schools of fish swim together when the crowd habits of a much larger group got his attention: 1.35 billion fellow Chinese.

It was Lunar New Year back house in 2014, and Baidu Inc., operator of the nations greatest online search engine, had actually produced an animation of all the journeys individuals in China make throughout the vacation– the biggest yearly human migration . He quickly signed up with the business as an information researcher in Beijing, where hes tracking user place info to produce financial evaluates such as which city locations are ghost cities and the number of individuals are purchasing automobiles.

Big-data experts like Wu are bringing the countries enormous economy into sharper focus in a more powerful method than in other significant economies since, unlike many established countries, Chinas main statistics are insufficient or frequently suspect and personal evaluates can vanish.

“We were playing around pointing a flashlight at different things like labor or ports,” stated Jeffrey Towson, a teacher of financial investment at Guanghua School of Management at Peking University. “This brand-new info is expected to enhance existing details. Thats like switching on the lights and unexpectedly you see whatever.”

Baidu serves 6 billion searches a day and controls mobile mapping, which offers place information for its mobile users along with those of apps constructed on its map information. That reveals, for instance, the number of individuals check out Apple shops, and can indicate interest in the next iPhone.

Wu utilized the search and map information to discover so-called ghost cities, betrayed by structures that reveal little mobile-phone activity. He and his group of 10 utilized the innovation to make a suite of determines for shopping center traffic, tourist sees, and modern and commercial work.

We didnt understand if there was any business worth,” Wu stated in an interview at Baidus school in northwest Beijing. Institutional financiers did, and they rapidly discovered Wu after his determines were launched in June.

Official information in China still do not have crucial metrics, such as a routine survey-based joblessness rate. A personal production sign by Minxin was suspended forever this year, and an initial factory gauge reading by Markit Economics and Caixin Media stopped in 2015.

Big information is enabling options to emerge. Cheng Xin, a previous McKinsey &&Co. expert now at Alibabas research study arm, is establishing a GDP-type gauge assembled from the business trade information. It will take readings from the Taobao e-commerce platform and other information such as deal figures from Soufun.com, Chinas most significant realty web website.

“The concern is, will the federal government permit this kind of thing to thrive?” stated Andrew Polk, head of China research study at Medley Global Advisors in Beijing. “If they begin revealing things starkly at chances with main information, thatll be a genuine test of whether the regulative environment is going to be encouraging of these kinds of evaluates.”

Wang Zhanwei, an information expert at Didi Chuxing, Chinas response to Uber , states details business obtain from users can benefit the federal government. His group prepares to mine its ride-hailing information to determine customer costs by tracking how typically individuals go to locations like shopping centers, movie theaters and karaoke bars.

“Were aiming to utilize information to serve the general public,” Wang stated. “Governments might prepare cities much better when they understand more about how individuals commute.”

Officials are taking note. “We invite and are open to huge information,” stated Sheng Laiyun, a National Bureau of Statistics spokesperson, including that the company consists of a few of the information in signs such as retail sales, customer inflation and house costs. Personal service providers need to be more transparent with their methods to make trust, he stated.

Still, processing, making and arranging sense of all the brand-new sources of information isn’t really simple, as well as the worlds most significant hedge funds can have a hard time to discover a signal in the deep oceans of sound.

As the range of brand-new evaluates use a progressively total alternative view on Chinas economy, they are primarily validating main data, inning accordance with a report by Bloomberg Intelligence financial experts Tom Orlik and Justin Jimenez, who compared NBS numbers with huge information equivalents.

The China Satellite Manufacturing Index put together by San Francisco-based SpaceKnow Inc. increased just recently to a multi-year high, much like a personal gauge and the main index.

But a few of the brand-new information oppose main data. China might have saved more oil than main price quotes, inning accordance with an analysis of satellite images by Orbital Insight Inc. in Palo Alto, California.

“Theres a danger of utilizing these approaches in policy choices prior to we have a total understanding of their precision,” stated Joshua Blumenstock, an assistant teacher at the School of Information at University of California at Berkeley. They wont change main stats, “however they can supplement them, offer extra info and context, and unclean and in some cases fast measurements when main information do not exist.”

For Baidus previous fish-tracker Wu, the billions of information points that stream daily into his business servers permit him to search for financial patterns at a lot more comprehensive level, through the individual choices of users.

“Were touching measurements we couldnt previously, Wu stated. Its constantly intriguing to see how individuals act and move as financial animals.

With support by Xiaoqing Pi