Five things I learned on the Womens March 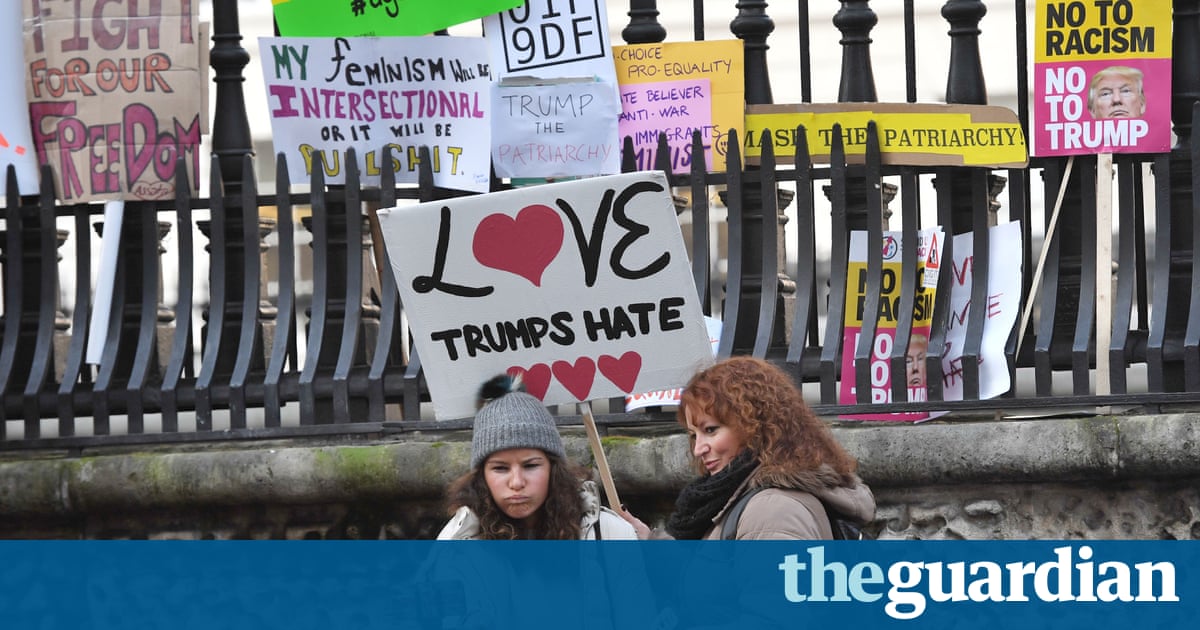 Among the 100.000 people walking through London to protest against Trump were Eva, her two-year-old daughter and her mum

I suppose I thought my two-year-old would look up at midday, the sky that rich denim blue, and shout, When they go low, we go high, or something with similar poignancy, with the clarity of a person just learning right and wrong. She was in her buggy, my mum was pushing her as she had me, in my buggy, on marches in the 1980s. In front of us in Trafalgar Square sat a 91-year-old woman with cotton wool hair and a discreet hearing aid, and behind us stood 100,000 people squinting into the sun. All she shouted though, as a screen told us that 1 in 5 women accessing domestic abuse services have been abused for more than 10 years, was the word Biscuits, and it was a bit embarrassing.

Shopping is not liberation

My favourite sign said: Melania, blink twice if you need help. People had got down on their carpets with felt-tips and coloured in banners and signs that screamed things like: Literally everything about this is so awful I have no idea where to start and So bad, even introverts are here, which spoke to me deeply.

As well as being cheering, as our feet froze beneath discussions about abortion rights, the signs were a stark contrast to the feminist merchandise that emerged when feminism became infinitely marketable. There was a time when the fashion and cosmetics industries invested in campaigns to undermine womens lib; their fear being that if too many women felt powerful and content we would no longer buy their products. Today, in a balletic turnaround, the opposite is true. Not only are cosmetics companies, such as Dove, co-opting feminist fury at unhealthy beauty standards in order to direct it towards its products, but high fashion has got involved, too, with Diors spring collection featuring a T-shirt printed with the phrase: We should all be feminists estimated price 500.

Its easy to buy a feminist T-shirt Theresa May memorably did, before she said she wouldnt be discussing Donald Trumps comments on women at their meeting last week. Its harder to do the work. The homemade banners were a timely reminder that we dont need to save up for an opinion; that shopping is rarely a political act; that what we want to say can be quickly scrawled with marker pens rather than bought from marketers desperate to cash in on what we are feeling; that anger is free.

We will look after each other

Inevitably I failed to meet any of my friends at the march, even Carrie and her seven-week old son. But when her baby needed feeding, and Carrie had to unwrap herself in the bright freeze of Trafalgar Square, a woman asked if shed like a coffee. Half an hour later, after having weaved through the banners and boots and cheering crowds, the woman returned to Carrie, breastfeeding standing up near the steps of the National Portrait Gallery and handed her a cup of coffee, and also a bit of cake. And then she went back to chanting.

The accusations on Twitter of virtue signalling seemed so clearly to be their own sort of signalling, like a massive dick lighting up the sky to show fellow dicks where to land. Here be dragons, breathing red hot takes.

I want to keep marching

There was something fiercely moving about last Saturday. It was partly the old-fashionedness of it, the simplicity of trudging through the cold with my family to be part of a massive crowd. Literally standing together. And, at the same time, the way it could only have happened like that right now, that campaigning continues online.

That night in bed, scrolling through hundreds of pictures of marches around the world, it was like zooming in on a photo from space. The massive crowd became individuals. People took photos of each others pink hats, of their kids riding on an aunties shoulders. There were famous actors holding crayoned signs, and artists with massive pussy slogans, singing.

The joy of it all! It wasnt just about making the world a bit better, but about making us feel a bit better, too about giving us the energy to keep on marching, trudging, cheering. Whether through donating, writing letters, or encouraging more brilliant women to become MPs. Next time I march, though, Im damned if my daughter doesnt hold up a really cute sign.

PrevPreviousCould nude exercise classes catch on in the US?
NextWH: No mention of Jews on Holocaust Remembrance Day because others were killed tooNext