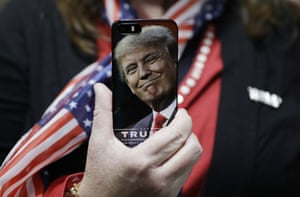 Tech and the rise of Trump: as the internet designs itself around holding our attention, politics and the media has become increasingly sensational. Photograph: John Locher/AP

In the wake of Donald Trumps stunning electoral victory, many were quick to question the role of so-called fake news on Facebook, Russian-created Twitter bots or the data-centric targeting efforts that companies such as Cambridge Analytica used to sway voters. But Williams sees those factors as symptoms of a deeper problem.

It is not just shady or bad actors who were exploiting the internet to change public opinion. The attention economy itself is set up to promote a phenomenon like Trump, who is masterly at grabbing and retaining the attention of supporters and critics alike, often by exploiting or creating outrage.

Williams was making this case before the president was elected. In a blog published a month before the US election, Williams sounded the alarm bell on an issue he argued was a far more consequential question than whether Trump reached the White House. The reality TV stars campaign, he said, had heralded a watershed in which the new, digitally supercharged dynamics of the attention economy have finally crossed a threshold and become manifest in the political realm.

Williams saw a similar dynamic unfold months earlier, during the Brexit campaign, when the attention economy appeared to him biased in favour of the emotional, identity-based case for the UK leaving the European Union. He stresses these dynamics are by no means isolated to the political right: they also play a role, he believes, in the unexpected popularity of leftwing politicians such as Bernie Sanders and Jeremy Corbyn, and the frequent outbreaks of internet outrage over issues that ignite fury among progressives.

All of which, Williams says, is not only distorting the way we view politics but, over time, may be changing the way we think, making us less rational and more impulsive. Weve habituated ourselves into a perpetual cognitive style of outrage, by internalising the dynamics of the medium, he says.

It is against this political backdrop that Williams argues the fixation in recent years with the surveillance state fictionalised by George Orwell may have been misplaced. It was another English science fiction writer, Aldous Huxley, who provided the more prescient observation when he warned that Orwellian-style coercion was less of a threat to democracy than the more subtle power of psychological manipulation, and mans almost infinite appetite for distractions.

Since the US election, Williams has explored another dimension to todays brave new world. If the attention economy erodes our ability to remember, to reason, to make decisions for ourselves faculties that are essential to self-governance what hope is there for democracy itself?

The dynamics of the attention economy are structurally set up to undermine the human will, he says. If politics is an expression of our human will, on individual and collective levels, then the attention economy is directly undermining the assumptions that democracy rests on. If Apple, Facebook, Google, Twitter, Instagram and Snapchat are gradually chipping away at our ability to control our own minds, could there come a point, I ask, at which democracy no longer functions?

Will we be able to recognise it, if and when it happens? Williams replies. And if we cant, then how do we know it hasnt happened already?